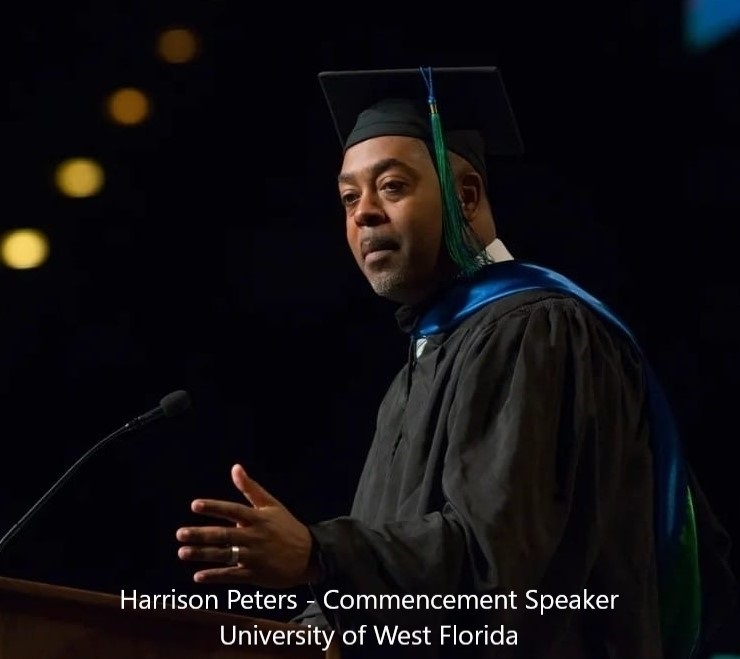 The Power of the Teacher

We recently attended a college graduation at The University of West Florida.  You know how it is…you’re excited to see your family member or friend graduate but you dread the entire “ceremony” thing.  Prior to graduation, you check to make sure your phone is totally charged just in case you need to play Solitaire or other games.

All of the above describes how we felt as we walked a few blocks to enter the Pensacola Bay Center for the class of 2019 graduation.  Boy, were we wrong about the speeches!

The main commencement speaker was introduced as Mr. Harrison Peters, Chief of Schools, Hillsborough County Public Schools, Tampa, Florida. Mr. Peters was a 1999 graduate of The University of West Florida. (By the way, I got Mr. Peters permission to use his name and talk about his speech!) He is now Chief of Schools at the 8th largest school district in the nation.

As Mr. Peters began speaking, the whole building (and it was a very large building) became quiet.  We looked at the attendees in the sections around us and were amazed at how “glued” people were to Mr. Peters words.  When he wasn’t fighting the obnoxious tassel that swayed from the side of his head to the edge of his mouth, Mr. Peters was sharing a wonderful story about the power of caring words.

Harrison Peters was raised by a grandmother with only a 2nd-grade education.  His mother had chosen a life of drugs and crime.  His dad was totally absent from his life.  His grandmother couldn’t offer much when it came to school work but she knew his attendance was important.

He told the story of a 10th grade teacher who had him stand up in class and asked what he wanted to be when he grew up.  Harrison’s reply was, “Well, I am tall and I play basketball for the school. I think I’m pretty good. I’d love to go to college and play basketball.”  The teacher looked at him and in front of the entire class said, “Boy, sit down! You ain’t college material!”

Thankfully, there was a guidance counselor and coaches who had other, more positive thoughts, and made sure he knew about his potential!  His basketball coaches would say to him, “It’s one thing to have a ball in your hands, but what do you have in your head?”

That counselor and those coaches changed the trajectory of his life!  They chose to see his potential not his past.

As Mr. Peters spoke, you could have heard a pin drop in the convention center.  He spoke directly to the graduates and reminded them that it mattered not what career path they chose (although he did recommend teaching and gave the number to the human resources department in his district J).  What mattered was that they cared for people around them.

WOW!  We could have listened to him speak all day!  We talked later about how neat it would be to bring Mr. Peters to Arkansas and have him speak to our clients and other teachers.  He encouraged and inspired both of us!

We are in the middle of Teacher Appreciation Week.  If you are a teacher reading this blog, please know that we at Insurance Advantage & LMA Financial Services appreciate what you do.  We hear the stories day after day.  We know teaching isn’t what it used to be.  We know that the days are long, the paperwork is amazing, the Professional Development requirements are many, and the pay isn’t near what it should be.  But we also know that you are exactly where God wants you to be and that you are special to each and every child who sits in your class.